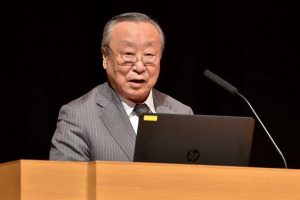 1) Many congratulations, Prof. Kitai, for the opening of the Symposium on “Growing International Arbitration in Japan.” We hold you in high regard and applaud you for your initiatives to develop the international dispute settlement courses in the English language at Keio Law School. It is a very new, inspiring and visionary way of legal education in Japan, and most importantly, it is something that is desperately needed by the present day Japanese society.

2) We, Japan Association of Arbitrators (“JAA”) which I am honored to represent, are very proud to co-host this important symposium with Keio Law School.

3) As you know, we have inaugurated the Japan International Dispute Resolution Centre –Osaka (“JIDRC”) in April this year. This is the first, special international arbitration facility in Japan. We plan to open another Centre in Tokyo, in time before the Tokyo Olympic 2020. Just last month, I attended the grand opening of the Japan International Mediation Center in Kyoto (“JIMC-Kyoto”). It is located within the beautiful campus of Doshisha University and co-sponsored by Doshisha Law School. I am extremely proud and satisfied that JAA was able to complete both of these ambitious projects very successfully this year.

6) More importantly, the function and role of arbitration appears to be getting better understood in Japan today than before as the necessary means of dispute resolution in an international context. Nowadays, we are observing many cases for which arbitration could be the only realistic alternative for the settlement of international disputes. It occurs to me that the recent ruling against some Japanese companies by the Korean Supreme Court relating to the compensation claims of Koreans for war time forced labor could be very illustrative about this point. I trust that the Korean Supreme Court did its best within the frame work of the Korean law and justice system. I am sure that they did what they should do. However, it would be very unlikely enforced by the Japanese court if the order was to be brought in for execution in Japan. It may be a classic case of conflict of justices. The national court system in such cases cannot perfectly function as a neutral forum to provide justice on such serious conflict of legal and cultural questions that go beyond the national borders. We know that this kind of conflict situations are taking place almost every day in the cross border business world. But, international arbitration could provide us with a practical solution to such international conflict situations. Therefore, I believe that for international disputes, arbitration would no longer be an alternative dispute settlement mechanism, but the principal one.

7) Lastly, let me stress, as Hone-buto said, that the education and training of the professionals will be more critical of an agenda than building of such facilities. Therefore we must not lose our primary and fundamental focus on educating and developing strong young global players who are capable of effectively providing dispute resolution services. It is the reason why JAA is working closely with the law schools like Keio and Doshisha. When I was the president of the International Bar Association in 2011 and 2012, I noticed that the major global arbitration centers are dominated by the certain power group of lawyers. They pursue legal doctrines of the common law and conduct the practice exclusively in English languages. I think we should help growing a strong international legal profession in Japan that can compete with them in the global arbitration markets. We should be able to build up dispute settlement forums friendly and suitable to effectively diversified legal cultures. I am very sure that JIMC-Kyoto and JIDRC will be very strong platforms on which new international dispute settlement system may grow.